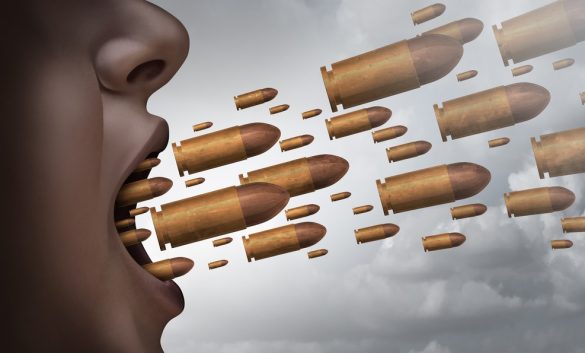 Some topics take a little more finesse to write about than others. Posting an entry about a sporting event you enjoyed won’t stir up much contention – but hot-button issues like political stances, community problems, or other controversial topics can fill your comment section with vitriol. The other side of the coin is that you want to be sensitive to people who may be impacted by the topic. Addressing people with respect and sensitivity can help you write about even the toughest topics – like domestic violence – with ease.

Frame the Topic the Right Way

If you start by announcing that you don’t care about the experiences of others, factual data, or the response of your readers, you’re starting from a place of contention. Even if the topic is something you feel strongly about, you want to aim to persuade your readers to see your point of view. Don’t try to knock them over the head with it. Convincing always works better than bludgeoning.

Imagine being a reader who doesn’t know about the topic – or someone that holds either the opposite or an uninformed opinion. Ask yourself how you can slowly nudge them into taking a new look at the topic, even if you don’t change their view right away. Once you figure that out, you’re ready to start doing your research.

In our example, you’d want to find a way to frame your thoughts about domestic violence in a way that both appeals to and touches your audience.

It’s always important to get your facts right, but it’s especially important when a topic is controversial. In a world of clickbait headlines and less-than-true factoids, the truth holds a lot of weight. Sometimes you just have to dig for it.

Controversial topics are ones that stir up passion in people. They make people angry. They challenge them. If one of the facts on which your argument rests is incorrect, it’s going to call the rest of your argument and opinion into question. So even if you know the topic inside out, take the time to check all hard facts. Anything that cites an incident, a number, or a statistic should be looked up and sourced. Double check your quotations. See if there’s any research that runs counter to your take on the issue.

Taking the extra time to fact check yourself will not only make you more authoritative, it will protect against inevitable negative comments that come your way when someone opposes your point of view. For example, with regards to domestic violence, you’d want to look at credible sources like the National Coalition Against Domestic Violence.

If the topic is sensitive, it’s good to make the theme of your post very clear at the outset. Some topics, like domestic violence, can be hard for others to read about. Being clear about both your topic and purpose for writing up front can be a warning to those who wish to avoid the subject. It can also form the foundation of your argument. Stating your purpose right away gives context to the facts you state and the opinions you put forth. It may help convince a reader to see things your way.

Not everything you have to say will be popular – but that doesn’t mean you shouldn’t be heard. For example, people accused of domestic violence are generally reviled, but not everyone accused is guilty. Even guilty people deserve a defense in court. So how do you write a blog about this topic without offending other readers? You use hard facts and logic.

Statistics, survey results, laws, and other straightforward facts are a good way to deal with topics that may seem less than savory to your audience. For example, click here to see a page that addresses specific laws with reference links and appeals to its audience with reason rather than emotion.

Let People Think for Themselves

Giving a fact and not proselytizing or berating your readers is more respectful of your audience and will make them think rather than just preaching to them.

For example, you can write that forty percent of girls from 14 to 17 say they know someone their age who has been hit or beaten by a boyfriend. That’s an upsetting statistic that may provoke an emotional reaction in people. Going on to say that it supports the idea of discussing domestic violence with kids when they start high school is a strong argument. However, going on a long, emotional tear about how parents don’t adequately prepare their children for the world will lead to alienating people by both insulting them and introducing more emotion into your appeal.

Letting people digest the statistic and the idea of starting to talk about domestic violence earlier in that situation could have led your audience to the right conclusion – without making them click away from your post for less antagonistic waters.

Clearly addressing controversial topics isn’t easy, but that doesn’t mean you should shy away from them. Sometimes you’re shining a light on a difficult subject that others don’t know enough about to understand why it’s important. Other times you’re reaching out to people who need extra help and pointing them toward useful resources. You might also be encouraging people to work together to make the world a better place through your writing. All of these purposes are worth the time and attention it takes to tackle a tough issue on your blog.