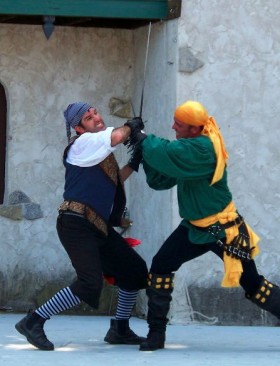 Pretty much no blogger gets to work forever without competition. Blogging is such a crowded space that pretty much everyone has at least one other site out there that could be seen as a competitor or alternative, even if it isn’t always a direct one.

Whether you’re blogging for business, for passion or for fun, this can be a pretty heavy thought. After all, whether it’s dollars or eyeballs, you don’t want another site taking anything away from you, especially after you’ve worked so hard.

But competition online isn’t anything like competition in the bricks and mortar world. In the real world, every dollar you spend at restaurant A is one you don’t spend at restaurants B-Z. You only have so much money and can only eat so many meals. Furthermore, there’s only a certain number of people in a your region, meaning only so many people who CAN visit any of the restaurants in it.

On the Web, there’s no such limitation as there’s no cost in visiting most websites, people can literally come from anywhere and one’s time available for reading sites on a particular topic is limited only by their interest in it.

Why “Competition” Is Different Online

When businesses compete in a bricks-and-mortar world, they are always competing for things that are limited in quantity. Whether it’s potential customers in a region, the limited spending dollars those customers have or fulfilling a limited set of needs for those customers.

On the Web, those “limited” elements are either much less limited or, in many cases, completely unlimited.

Imagine, for a moment, a Web where there was just one site about the iPhone. No matter how great it was, it probably wouldn’t be nearly as popular as similar sites are in the real world as people simply wouldn’t be in the habit of turning to the Web for information about the product.

However, open up a few more sites and a community begins to form talking about it. People start to regularly turn to the Web for information and this causes the potential audience for these sites to grow. Couple that with better linking and SEO opportunities and every site in the niche has the potential to do better.

In short, though you could see all of the sites as being competition to one another, they are actually working together to grow the niche, making it a true example of a rising tide lifting all boats.

To be clear though, this doesn’t mean that there is no such thing as competition online. It’s just that many of the things that are finite in the physical world are infinite in the Web-based world. There are still some finite things, like money, but healthy competition can help encourage others to open up their wallets more by confirming the validity of the niche, thus creating new customers.

So, even if there are finite resources that you’re competing over, most likely “run them out of town” isn’t a good response to your competition. Instead, it’s important to realize just how valuable healthy competition can be to both customers and businesses alike.

Once you realize that competition on the Web means something very different than in the physical world, you can also see why trying to run your competition out of business is not, most likely, your best strategy.

Not only is that a lot of effort spent on doing something that won’t help your site much, but such hostility may actually hurt your niche and cost you dearly in the long term.

Instead, if there’s enough room in the niche for both of you, it’s probably wiser to spend that energy on growing your niche and make even more room for all of you.

This means doing something somewhat radical, embracing and befriending your competition.

Rather than focusing on trying to beat your competition at what they do, find ways that you can work with them. Take different angles on the niche, cover different areas and link to one another. Most importantly though, reach out to them and talk with them, make them your allies and not your enemies.

In short, treat your competition not as business rivals, but as neighbors.

Think about it, you don’t try to run your neighbors out of town just because, without them, you’d have a bigger yard. Instead, you find comfortable boundaries for all of you. Also, realize that a strong community has a lot of benefits to everyone, including “competition” websites.

If you work together as a community, you can attract new people to your niche and cause those already interested in the topic to spend more time and get more involved.

Think about it this way. Though car dealerships can be found all over, they generally cluster into strips that will have several or even dozens in a very small area. Though the dealerships are competition to one another in that most customers buy only one car, most customers visit more than one car dealership. As such, having so many in one place makes that area an attractive one for a potential car buyer to shop, increasing foot traffic and eventually sales for all the dealerships.

Websites work much the same way. A good community coupled with good SEO can generate a lot of interest, even among those who might not have visited such a site in the past. That means that everyone is better off with cooperation rather than warfare.

Of course, the bigger problem with the Web is that it is an extremely crowded medium. Even if you are able to push one competitor out of business, two more will likely be there to take their place and you’ll likely be weakened by your efforts.

While competition does exist online, as I said before there are still finite resources you can vie for, most sites aren’t in competition, especially direct competition, with anyone.

If you do something original and offer something unique, no matter how many sites are in your niche, you’ll have a place carved out for you. By building that community, rather than killing your neighbors, you can make that place more valuable and larger over time.

Killing off your neighbors doesn’t improve your neighborhood, it just makes room for even worse ones to move in later, something you can avoid by making your community a better place.