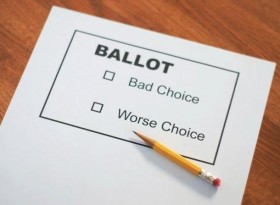 Whether you love or hate Apple products, there is no doubting their success, both in terms of their general reputation and in sheer dollars.

However, that success has not been due to market research. Steve Jobs has repeatedly quipped that Apple never performs any market research nor hires consultants. In that regard, he joins Henry Ford who famously (allegedly) said, “If I asked my customers what they want, they simply would have said a faster horse.”

So, while James’ excellent column earlier this week on opinion polls is correct that asking your readers what they want is important, it’s also important to take what they have to say with a grain of salt.

Simply put, your readers probably know what they want, at least to a certain degree, but they likely have little idea as to what they actually need. However, it’s your job as a blogger to give them the latter because giving someone what they need is exactly what makes them the most loyal and long-term readers possible.

So how do you give your readers what they need without ignoring their opinions? That is a much more difficult question to answer.

To be clear, as James said, user opinion can be incredibly valuable. However, it has a very serious limitation, it is almost always backwards-looking.

The only thing you readers can do is take a look at what you have done currently and then find ways that they think you could improve upon it or ways you can add to it.

While that can be very useful, they aren’t going to see any departures from the norm that might be wise or even necessary. For example, if you run a blog that focuses on reviewing headphones, you readers might recommend that you do a review of a certain brand or maybe focus on cheaper/more expensive models, but they probably won’t propose a guide on how headphones work, something that could be very useful to your audience and help you expand your readership.

Another problem is that readers will, generally, only suggest things that are to their benefit, often ignoring your needs and the needs of the site. For example, readers might complain or even protest the use of ads on your site, ignoring that, without those ads, the site couldn’t exist.

What this means is that, while it is critical to know what your readers want, it’s important to remember where that desire is coming from and that those wants may not always be practical or even what is truly in their best interest.

Simply put, sometimes you to ignore and go against the wishes of your readers, the trick is to know when.

None of this is to say that you shouldn’t take opinion polls or ask your readers what they want. That is still very important and both Steve Jobs and Henry Ford are extremists in this area. That is an approach that can bite you easily as the iPhone copy and paste debacle showed.

Still, you can’t trust your readers, no matter how astute they are, to know everything they want or need, especially what they will want or need in a few months time. As Steve Jobs said, “You can’t just ask customers what they want and then try to give that to them. By the time you get it built, they’ll want something new.”

You have to be the one to look farther down the road and to make the big decisions about the direction your site is going to take.

To do that, you have to put yourself in your reader’s shoes. To accomplish that, you need to know who they are. So, instead of or in addition to asking them what they want, ask your who they are. Get all of the pertinent information you can including their age, education level, general tastes, viewpoints, etc. and from that try to imagine yourself as them as they visit your site.

From that perspective, you need to look at what they need or truly want. What does someone like that need that they might not know they need until they get it?

Going back to the aforementioned headphone review site. If you took a poll of your readers and learned that they were primarily music buffs and not engineers or scientists, you would quickly glean that they likely had almost no understanding of how headphones worked and that such knowledge might help them make smarter decisions down the road.

Your readers might not know that they don’t know or might not realize that they need to, but once you provide the info, they’ll quickly see how valuable it is.

In short, what you need to do is try to understand your readers needs and wants better than they understand themselves. It’s not hard to do with an outside perspective, but you have to look past the answers on a survey to do it.

In the end, your job as the owner of a site is to be looking forward and trying to be ahead of your readers’ needs, not behind them. This can be tough, especially if you only go by what readers say they want, but that is exactly how you build a loyal and devoted readership.

This isn’t to say you shouldn’t take opinion polls from time to time. As James mentioned, they teach you about your audience, help your readers feel engaged with the site, can give you some great ideas and even point out some holes that you need to fill before moving forward.

Opinion polls are a necessary part of the equation, however, using them is not as simple as compiling a list of their suggestions and implementing them one after another. The goal is to take that information and those suggestions and construct something even greater.

While that requires a lot more thinking and a great deal more work, if you can do it, you’ll have a site that, like some of the better companies out there, are able to anticipate user needs, meet them and grow because of it.

That, in turh, is how you go from having a “good” blog to have a “great” one.