Many among us manage, or write on, several blogs. Sometimes it isn’t easy to monitor your blogs or your entries. There are many awesome statistic plugins such as Google Analytics or the Splashpress owned PMetrics.
Lately I have discovered a new tool to monitor my blogs or the blogs I write on: aideRSS. Much has been written about aideRSS already, mainly about it’s usage as a feed filter, but I have discovered that the free tool can be used for another purpose as well.

aideRSS uses the PostRankTM algorithm to rank entries. What is PostRankTM?

I look at the number of comments, number of bookmarks the visitors made, and the number of trackbacks. I collect this information from the internet and then normalize each post against the average for the blog in question – if you always get 15 comments, then you getting 17 comments doesnâ€š’t affect the ranking as much as, say getting 15 comments when you usually get 2.

Some months ago we discussed the Blog Metrics plugin for WordPress. This little aid will show you how often posts by every author are viewed, but unless you’re the newest Nick Denton around the block, you might want to assess your authors on more than just pageviews: number of comments, votes on social bookmarking sites and backlinks in Google. This exactly is where aideRSS comes into the game. Have a look at the following screenshot and you’ll immediately understand what I mean [Click for enlarged view]. 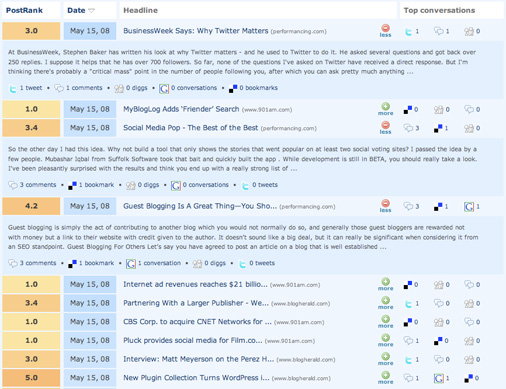 For this screenshot I built a stream of some of Splashpress’s major blogs: The Blog Herald, Performancing, Wisdump, 901am and your own BloggingPro. As can be seen, aideRSS displays all the information concerning number of comments, backlinks and conversations in twitter/bookmarks in del.icio.us. But things get even better when you want to analyze a single feed [Click to view enlarged display]. 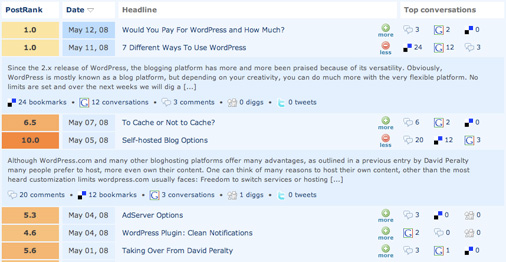 In this screenshot I have restricted the aideRSS analysis to the last 7 entries here at BloggingPro. It now is easy to asses both the importance and popularity of every single entry. Which one has the most comments, which ones has been bookmarked most, etc.

Remarks: As can be seen in both screenshots, there still seem to be some errors with the aideRSS algorithm:

Still, aideRSS has become part of my daily workflow, more even than pageview statistic programs have.

Franky writes in his free time at iFranky and can be followed on twitter.